My friends, Carrie, Lisa and I had picked this race months before and decided this would be a great adventure!  Actually Carrie and I chatted about some of the races that Ultra Adventures does during my 100 mile Blind Pig race.  After she spent nearly 50 miles there pacing me, I told her to take a look at some of their races, Antelope Canyon, Brice Canyon, Zion, Monument Valley, etc.  She could pick whichever one interested her and we’d go do it.  So Antelope Canyon was her pick, and Lisa and I had to admit it looked like an awesome event.

We made our plans to fly into Las Vegas on the Thursday before our Saturday race.  You could fly into either Salt Lake City, Phoenix or Las Vegas, all were within a reasonable driving distance of the race in Paige, AZ.  In the end Las Vegas was the least expensive at the time we bought our tickets.  So early Thursday we flew out to Las Vegas and spent the day traveling from there to Paige.  Driving through Nevada, Lisa wondered why on earth we fought the Indians for that land! But we headed north and into St. Georgia, Utah and then into Zion Canyon.  We got to spend several hours exploring Zion before heading out to Paige. 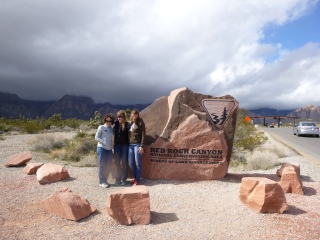 We relaxed on Friday and did a little sightseeing, not actually too much to see there.  But we did hike out to see the famous Horse Shoe Bend and take in the view and sights.  We knew we’d run by there the next day in the race but thought that it might be nice to get a good look when we weren’t trying to run.  We didn’t want to spend the entire race taking pictures even though we were determined to enjoy it fully.

We did our packet pick up on that Friday afternoon.  They offered the racers a unique experience to volunteer and help put mud some Navajo huts.  Afterwards they served us some awesome Navajo tacos.  You have to take in the whole experience here. 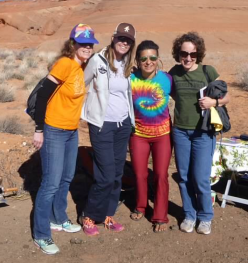 Another high light for us we getting to meet Vanessa Rodriguez, aka Vanessa Runs

The race started early on Saturday morning.  We had dropped off our drop bags the night before, but wanted to get there early because there was an early morning Navajo Indian Prayer time before the race start.  Soon the race was off.  It was an early dark start.  We started closer to the front which is not where I usually like to start most races.  I don’t think we realized we were that far up.  But it got us off and running and it started with a fairly large rock climb which was nice not to be behind hundreds of runners.  Once over that rock and down the other side it was a sandy desert run for many miles.  While it was still dark, you couldn’t see but we followed a long power line section as we worked our way out towards the first Aid Station.  It was getting light out and we dropped into the first slot canyon of the course.  It was a nice downhill canyon that was beautiful.  Before we knew it we arrived at the first aid station. 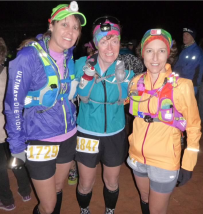 One thing that was very different about this race from the beginning was that the RD and the entire race was very Green.  All trash was recycled and composted, and each aid station had a composing “out house”.  Well it was more of a tent but it was nice to have.

So at our first stop we grabbed some fruit and kept going.  Now we were on a long 3 mile or more sandy wash road.  Basically a very wide sandy road that was only driven on by large 4-wheel drive trucks.  The sand was deep and relentless, tiring you out very quickly.  Lisa seemed to do better in this section and left Carrie and I fairly quickly.  This section led us to Upper Antelope Canyon which was the most beautiful canyon of the race, although as we hit it, the sun had not fully come up and it was a little dark inside when we ran through.  Once through the canyon it was back down the 3 mile sandy road wash back to the aid station as we traced our way back up the way we came down the power lines. From the Antelope Canyon Aid station it was 6 miles to Slick Rock AS and a turn towards the Horseshoe AS. 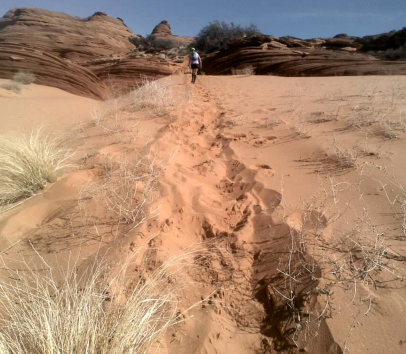 Carrie had a camera clipped on her pack that takes photos every 30 seconds.  You can see in this picture the deep sand

This whole section was long deep sandy stretches through the desert.  Once we got past Horseshoe AS we headed out to run a long section above Horseshoe bend and some of the most beautiful sections with unbelievable views.  Carrie and I held a steady pace and just kept moving in the deep sand as best we could. It got hot during the day light hours with no shade on the course but in short sleeves and with the dry heat it wasn’t that bad.  We got to Water Holes AS and immediately dropped into Waterholes Slot Canyon. It was really more like a steep climb down into it.  Carrie and I enjoyed this section and ran here with our new friend Janeth, taking a few photos through the canyon.  Soon out of the canyon it was back to sandy road sections and 5 miles back to Horseshoe AS, retracing again our way back to Slick Rock AS.  Now it was a short distance back and then climb up the to Paige Rim AS which was only a few hundred feet from the finish line. But first it was a 10 mile loop run around the city of Paige with beautiful view of Lake Powell.  At least the deep sand was behind us, but for Carrie the sand had done it’s damage on legs and wearing her out.  After completing this 10 mile section, it’s a drop back down to the finish line and a just Navajo Indian made finishers award. 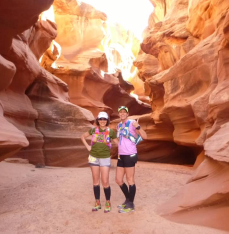 Carrie and I in Waterholes Slot Canyon

Lisa had finished an hour or so before us and sat around a bon fire with many others waiting for us to come in.  It was such a perfect day in so many ways, but I think we were just all ready to get a shower and some sleep. 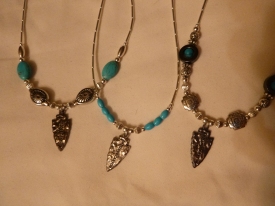 We each picked out a slightly different Navajo made finishers award

Now after a little time to reflect on our Antelope Canyon 50 Miler let me share some of what I learned: