This race really deserves its own report, for sure. Truly one of the most beautiful races I have run but that’s getting a little ahead of things, so let me back up some.
My friend Stephanie Johnson, from Knoxville, TN asked me several months ago to come join her on this 50 mile run. We run at about the same pace, have run several other races together, and enjoy each other’s company. She had lodging figured out, so I was all in! With Stephanie planning the details, I barely even looked at the weather or race information prior to heading up to Tennessee for this inaugural race.
The weather looked great, other than some rain the day and night before, and the course looked to be mostly runnable with around 5,000 ft of climbing. No problem. I met Stephanie and her parents at the camp site (A.K.A. lodging) the afternoon before the race. Later, her friend and running buddy from Knoxville, Bobby Trotter, joined us at the campsite. Bobby was going to crew and pace us. I had met him at other races and was happy to see our friend. Later that night as Stephanie and I were falling asleep in our tent, listening to the rain come down, we discussed our “goal” of a sub 12 hr finish for the 50 miler. We both agreed that we were very capable and felt this would not be a problem.
We were up and ready for the 6:00 a.m. start time. It had gotten light out long before that and the sun wouldn’t set that night until just before the 14 hour cutoff time. (You can do that simple math!)

Our group of friends just before the start

We started on a simple 2.7 mile loop just a hundred yards from the starting line. Right away, the scenery was a beautiful section of single track trail, and we ran under huge limestone overhangs. The trails were technical, single track with gently rolling hills, which suited both of our running styles well. We came out of the loop feeling comfortable that we had started off at a good pace, not too fast, and about the front of the middle pack. We headed back to the start area and then had 2 miles of road before dropping onto the Hidden Passage Trail for the next 4.5 miles. Every section of trail we ran on was prettier than the one before. We encountered endless limestone overhangs that often had water dripping off the side of them. We would run under and through these overhangs as we worked our way along the single track trail. The vegetation was green and luscious from the recent rain and was well hidden from the sunlight in the dense forest. We enjoyed seeing the moss and ferns along the way, while keeping a close eye on the technical trails. We had completed nearly 9 miles when we came to our first AS, which was water-drop only. 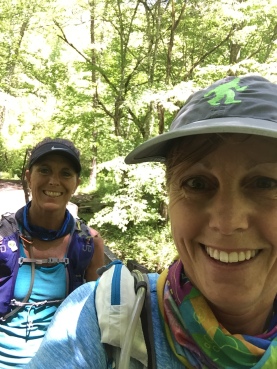 A “proof of life” selfie early in the race!

There were several other runners at this AS, but we didn’t need any supplies and kept moving. The few runners we saw there would be a few of the only other runners we would see throughout the race. We were never passed by other runners during the entire race, so we continued to believe we were strongly in the middle of the pack. We experienced our first rough patch in the next 4.7 miles to the first full AS. We followed a creek that was very shaded and the trail was very wet from recent rains. It probably never dries out much. The trail was more technical, covered with rocks, and we had to cross lots of wooden plank bridges. The wood on the bridges was so slippery that it required great caution to carefully get across them. Just as we got back into our running groove we would have to stop to cross another wooden bridge. This would be the only section where I took a fall when my feet came out from under me on a wet rock and I fell on my left arm with no time to try and catch myself. Luckily the landing was soft and I was up and off again with no injuries.
We were very happy to get through that section and see our crew, Bobby and Stephanie’s parents, at the 13.6 mile AS at Divide Road. I took off my long sleeve shirt while Stephanie got rid of her jacket, got our packs refilled and were quickly on our way. The next 6 miles were some of our favorite running of the day. The scenery was beautiful and we were able to run almost the entire section before we went to the top of the John Muir Overlook. From here, we had amazing views of Big South Fork, then we descended into our next AS at Long Branch. We now had 6 miles to another water drop and then 4 more miles before reaching Charit Creek AS.

A short section of our muddy rocky fire roads

These 10 miles turned into our least favorite section of the course. It was beautiful, and most of it was beside a large flowing creek, which in many ways made the section enjoyable. But the “trail” was basically flooded fire roads that were rocky and covered in not just water but shoe-sucking mud. At times, we were diverted onto trails that took us around muddy sections, and other times we tried hard to find our own paths around the mud. The scenery was no less beautiful, however, and we even enjoyed one stop at a large creek to soak our feet and wash the mud off of our legs.
We finally got through the next AS and arrived at the Charit Creek AS where we were met again by Bobby and Stephanie’s parents. Stephanie changed her socks and shoes while I changed my socks before we headed out for the first of 2 loops around the 4-mile Twin Arches Loop Trail. The scenery was unbelievable and we decided that a second time around this loop would not be bad at all. Bobby joined us on our second loop and took a few pictures of some of our favorite sections.

Running through the arch

After one final time through the Charit Creek AS, we were off on the home stretch of roughly 11 miles. We knew the climb out of Charit Creek would be a big one, probably the longest climb of the day. The 2.8 mile climb to Gobblers Knob seemed longer, and at times endless, but we continued to run as much as we possibly could. We had another 3 mile stretch of mostly fire roads as we continued to the final AS. We had passed one runner on the way to that AS, and then another guy we had passed early in the race surprised us by showing up right behind us as we were headed out. After a one mile drop down to Rock Creek and a water-drop AS, we were back on the John Muir trail and then the Hidden Passage Trail again. The trail finished as they put us on 2.3 miles of jeep roads before we were back on the Picketts Park Hwy and a 2 mile stretch into the finish line.

We knew we had run strong all day, kept a steady pace, passed only a few runners along the way but was never passed by others. When we finished in 13:35, just 25 minutes before the cutoff time, we weren’t a bit disappointed! We ran well all day and finished strong at the end. We had even dropped our pacer somewhere in the last 4 miles. We knew we were solid, middle of the pack runners, but only a few other runners came in behind us. Lots of runners ended up with DNF’s and left us near the back of the pack finishers. Almost all of the runners finished well behind their estimated finish times.
In the end, the race course could have had a few more “confidence” markers (although we never once got off course) and the aid stations could have had more “real” food such as PB&Js and cold Cokes. A little less mud would have been nicer, as well! But the course itself could not have been more beautiful or the running company any better! 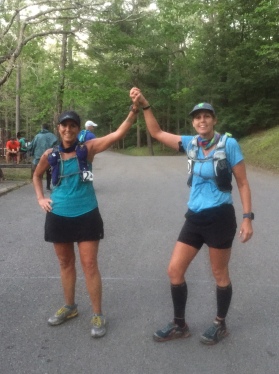